Juniper Creek is choked with fallen logs and overgrown brush. Friends had warned us we probably would expect a tough time. And it was tough in places. But as we went further up the creek we realized we had gotten lucky. The recent rain had pushed the water levels higher and made it easier for us to get further up the creek than we’d ever anticipated.

We stopped for lunch at the confluence where Honey Island Swamp Creek merges with Juniper Creek. We stood in a sunny clearing and eating lasagna sandwiches and drying off a little in the February sunlight.  After a few bites of lunch, we wandered north following the east side of Honey Island Swamp Creek, crunching through dry leaves. It was a forest made up primarily of species of oak and sweetgum maybe 50-75 years old. Many of the trees appeared diseased.

We saw what we think was bear poop.

Suddenly John said, Look up there! What is that???

There was a large reddish brown ball up in the tree. 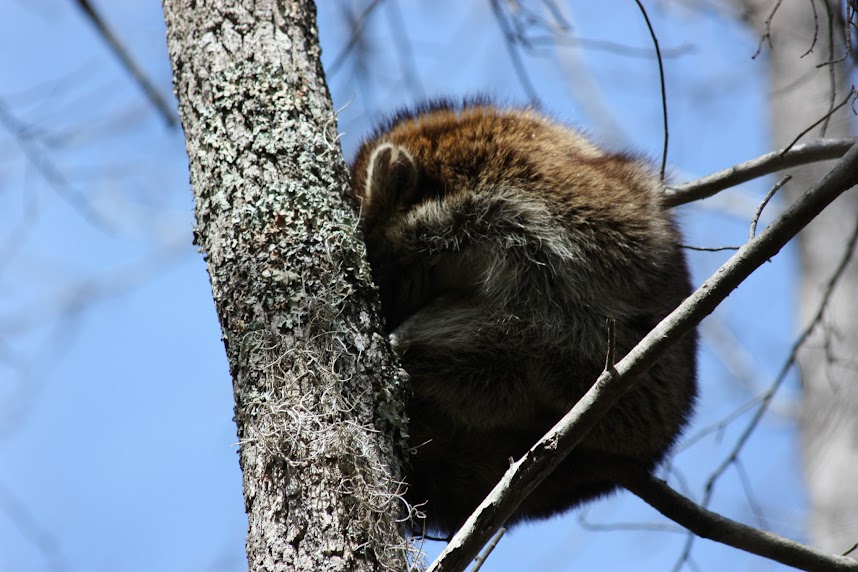 It was a raccoon, sound asleep. No matter how many pictures I snapped, or how much we talked, he never stirred.

Then we began to notice them. Massive cypress stumps, frequently taller than we were. Here was one. Then another there, and there and there. Everywhere. Here is one of them.

In this photo I’m smiling. That’s because this was only the first one we saw. 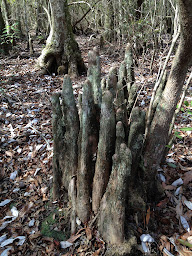 These cypress stumps and their orphaned knees gave silent evidence that this was once a very different forest. A forest where cypress giants stood rooted – not in dry leaves – but in water. A quick glance at any good topo map showed canal lines criss crossing the region.

Someone had drained this swampland, then made a killing, cutting down these huge trees and turning them into boards.